Meet Sawyer and Scout, the Adorable New York Goats Who Love to Hike

Prepare your hearts for the ultimate dose of cuteness. Two New York goats are living their best lives, as both important community members at a therapeutic boarding school and as seasoned Adirondack hikers.

Sawyer and Scout are a dynamic duo of Nigerian dwarf goats living in Nyack, about an hour north of New York City. At just a year and a half old, these goats have lived at Summit School since they were just a couple months old.

Anna Solveig Sicari helped start the school’s animal care program that is now home to a cluster of creatures.

“I started out in the phys-ed department, being active with the kids all the time,” Sicari said. “For mental wellness, it’s so important, that’s just what I spew out of my mouth all the time.”

She and the kids were running around so much, she figured they should get some dogs, and with dogs, came the idea to bring in more animals. Summit School got Sawyer and Scout at just two months old, and Sicari’s students helped her raise them. 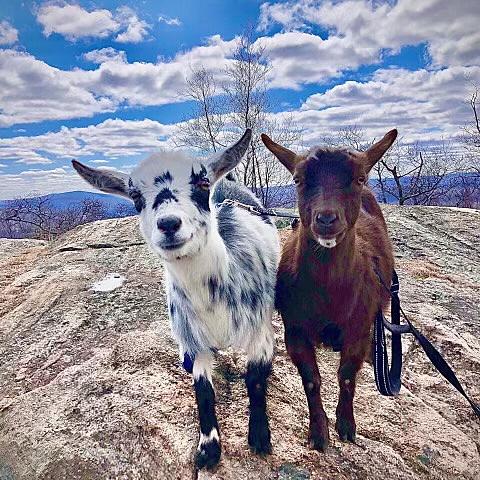 “I have pictures and videos of us bottle-feeding them and it’s probably the greatest experience of my life,” Sicari said. “I think that’s why they’re so attached to me and to the kids at the school and why they’re really friendly with people.”

As Sawyer and Scout grew, Sicari started to involve them in more things, including one of her longtime passions. Being from Saratoga Springs, Sicari grew up hiking, but it wasn’t until more recently that she took on the challenge to become an Adirondack 46er.

“I did my first one like four years ago and I was hooked on just doing them all and checking them off this list,” Sicari said, noting that Big Slide was her first big peak. “They say it’s like a beginner one, but I remember it being my first one and it took like eight hours. At the end, I thought I was gonna die.”

After four years and lots of hiking, Sicari finished all 46 peaks and became an Adirondack 46er. Then, earlier this year in January, she started bringing the goats along on her shorter outings, like her daily hikes to Hook Mountain with her students.

“I was scared at first and kept them on the leash the whole time, and now, we‘ve started doing it so often, they don’t even have to be on-leash,” Sicari said. “They don’t ever go like more than five feet from me.”

So far, they’ve never had a negative run-in with dogs while out hiking, and as for other hikers, well, Sicari said they love the goats.

“Not one person just walks by, not one,” Sicari said. “So like everyone wants to stop…. People are obsessed.”

Most recently, Sicari and her daughter, along with Sawyer and Scout, hiked Pinnacle overlooking Lake George and Kaaterskill Falls while visiting family in Upstate New York. Sicari makes sure to stick to lower-elevation hikes when she brings the goats, sticking to the ‘Leave No Trace’ outdoor ethic because the goats may eat or trample on vegetation.

Whether they’re out hiking or bringing joy to the community at Summit School, Sawyer and Scout are truly bringing so much joy to those around them. They even have an Instagram so people all around the world can get to know them!

“The joy that animals bring to people is unreal and probably just like the greatest thing,” Sicari said. “[It’s important] to give the animals the best life also, but I could have never imagined how much joy these animals bring to everybody.”